Las Vegas Shows October. Fall month are great to plan your vacation to Sin City. While great deals on tickets you may find throughout the whole year, the weather in Las Vegas has its better and worse months. Las Vegas in October offers beautiful weather, much cooler than during warmest months.

Halloween is on the way….. Are you ready ?

This is the time when many hotel pools close for the season – if you take your swimsuit you may not have a chance to wear it. Bring more layers and a light jacket to enjoy early morning or evening walks, if you are planning your trip for the end of October expect a cooler weather and some rain.

With highest temperature in October at 82 degrees, visitors can fully enjoy Las Vegas outdoor entertainment. Choose an outdoor adventure from the top popular tours like A Complete Hoover Dam Experience or Grand Canyon Air Tour & Discovery Tour, Bruce Canyon & Zion National Park, A Red Rock PM Express or A Valley of Fire Tour and you will not be disappointed with your experience!

October is the month to see top headliners in town – book your tickets to Shania Twain concert at MGM Grand, see Boyz II Men at Mirage, Lionel Richie at Planet Hollywood, and more.

Get ready for a night of classic rock when The Righteous Brothers featuring Bill Medley with Bucky Heard take the stage at Harrah's Las Vegas for a limited-time concert engagement.

This 90-minute show allows to experience Michael Jackson’s music in a new way. Breathtaking performance transmits the spirit of the legendary star making audience cry, sing and believe that the King of Pop is performing for them here and now! The cast is composed of experienced performers from all around the world. Mandalay Bay theater has a state-of-the-art surround-sound system with perfect acoustic range. Guests enjoy breathtaking views no matter where their seat is located. 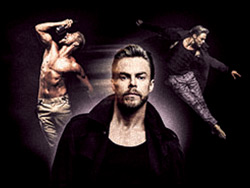 Start practicing your cha-cha and be amazed by Derek Hough's fast moving feet in Derek Hough: No Limit in the Flamingo June-November 2020.