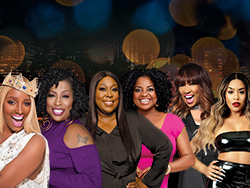 This is ladies night, and the feelings right because six of the funniest comediennes in the world are coming together for a night of laughs.  Each of these ladies has climbed the ladder of comedic stardom on their own, so when you get them all in a room together, you can expect it to be one hilarious evening you won’t forget.

Hosted by reality star-turned-actress Nene Leakes, who became infamous for her time on Bravo’s “Real Housewives of Atlanta” for telling it like it is, Ladies Night Out spotlights one hilarious woman after another.

Don’t miss your chance to see these ladies live at Paris Las Vegas on February 15, 2020.

There are no upcoming events at this time.