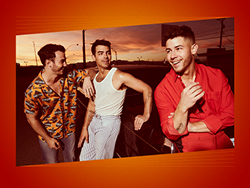 The Jonas Brothers are all grown up, and after a six-year hiatus, this iconic trio is burning up Las Vegas with a residency at the Park Theater. It’s like we’ve been bitten by the teenage love bug all over again.

This limited-time engagement is coming to Sin City in April, the perfect bookend to their “Happiness Begins” tour. Thankfully, we didn’t have to wait until the year 3000 to see them perform together again.

The trio began as Disney channel heartthrobs before splitting up in 2013 and setting sail for their solo careers. Nick Jonas reached No.1 on the Billboard charts with sultry, sexy tunes like “Jealous” and “Chains” which propelled his image into adulthood. Joe Jonas and his newly-formed band, DNCE, reached No.9 with their hit “Cake by the Ocean.”

Now they’ve gotten back together, and their new album of feel-good tunes has us sending out an S.O.S. because we might just die of excitement. Their first single “Sucker” rocketed the newly-revived band back into the limelight with a No.1 hit on the Billboard Hot 100. The single also went double-platinum the same year and was rated No.1 on the Billboard’s Critic Picks list of the “50 Best Songs of 2019.”

Whether we’ll be hearing teenage favorites or their newest, hottest hits, we’re ready to dance on top of cars and let our inner fangirls squeal once more.