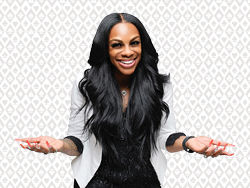 We’ve entered the new age of comedians. Now, instead of going to smoky comedy clubs to find talent, you can just log in to social media while wearing sweatpants and laugh until you cry. And since you’re so social media savvy, you’ll know who we’re talking about when we name drop Jess Hilarious.

Jess Hilarious, aka “Jess with the Mess,” might have been discovered via Instagram, but you better believe she’s funnier up-close-and-personal. So put your pants on, call up a friend and head over to the Mirage to check this new talent out. If she can get 1.5 million views on Instagram, she’s worth buying a ticket to see her live. Her hilarious son might not be there to compliment her jokes, but two things are for certain when you see her Las Vegas show: she’ll be a mess and you’ll laugh at her jokes long after she leaves the stage.

Jess Hilarious isn’t just hilarious, she’s a downright hoot-and-a-half. So make sure to get your tickets to Jess Hilarious, you won’t regret it.