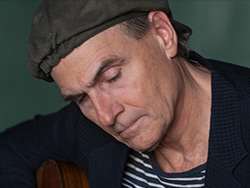 If you see fire and rain, and you’re not James Taylor, you might’ve gone overboard in the ’70s. But we digress.

James Taylor is bringing the soundtrack of our lives to Vegas and we’ve already formed a puddle of tears outside the theater. His music is beautiful, relatable and there’s something about it that makes you want to play it in the background of all your major life events. And can you blame us? His songs are the best of the best. So much so that he’s been inducted in the Songwriters Hall of Fame and the Rock and Roll Hall of Fame. His songs include, “Fire and Rain,” “Country Road” and “Mexico.” Those songs helped him sell more than 100 million albums and score a handful of Grammys.

James Taylor is coming to Las Vegas to give us the soundtrack we deserve.