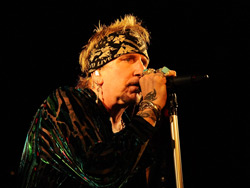 This rock band, formerly known as Great White, started in ’87 with hits like “Rock Me,” “Once Bitten Twice Shy” and “House of Broken Love.” But like all great turbulent rock bands, they broke up and Russell struck out on his own. He reemerged as Jack Russell’s Great White in 1996 and released hit after hit like “Sign of the Times,” “She Moves Me” and “My Addiction.” They won a few awards here and there, but it’s their music that keeps us movin’ and a groovin’. They released a new album in 2017 and have been touring ever since.

It’s time to get your tickets to Jack Russell’s Great White inside Golden Nugget and rock out once again.