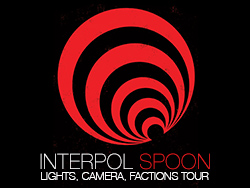 The Lights, Camera, Factions Tour features both bands in equal measure and will include hits from both of their latest albums, Spoon’s Lucifer and Interpol’s currently untitled album that will be released soon.

Interpol hails from Manhattan and earned massive critical acclaim on their debut album, Turn on the Bright Lights. The album earned top spots on multiple best album lists. Each of their subsequent albums continued to push them farther into the limelight.

The band Spoon formed in Austin, Texas, where they experimented with their art rock sound until they honed it in for their second album, Soft Effects. The album showcased a sophisticated, minimalist approach to their music which earned them critical acclaim and a much larger fanbase.

From there, Spoon has earned multiple Top 10 spots on the Billboard Charts, released ten total studio albums, and performed live on many late-night shows.

Don’t miss this dynamic duo of indie rock superstars when they play at Virgin Hotels Las Vegas for one night only!