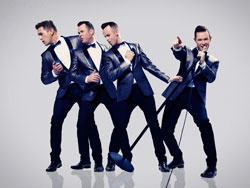 Get ready to clap your hands, stomp your feet and maybe even learn some new dance moves at Human Nature Jukebox.

Human Nature’s smooth vocals and flawless harmonies have skyrocketed their popularity and success on the Las Vegas Strip for nearly a decade. Together the four entertainers; Toby Allen, Phil Burton and brothers Andrew and Michael Tierney are undeniably one of the world’s greatest pop-vocal groups, having entertained millions worldwide and releasing 23 best-selling albums in their 25-year career. Their latest multi-platinum album, “Jukebox” is the influence for the brand new show at the Venetian Las Vegas. Human Nature were voted “Best Singers” by the Las Vegas Review-Journal and have appeared on Oprah, “Dancing with the Stars,” “The Chew” and headlined their own PBS Special “Human Nature Sings Motown.”

Although audiences in Vegas may not be that familiar with Human Nature, they are one of the most popular acts from Australia. The group formed in 1989 as a Doo-Wop band in Sydney. In 1994 they signed with Sony Music and released their debut album, “Telling Everybody” in 1995. The album was an instant hit, selling four times platinum and became the most successful debut album ever released in Australia. Human Nature released their fourth consecutive No. 1 album, “A Symphony of Hits,” in 2008.

During their Vegas show, the members of Human Nature get personal with their audiences and between songs greet audience members and tell stories. They explain since they were young they always aspired to be as great like The Temptations and The Miracles. Part of that inspiration came from the positive message they got from hearing Motown music and then wanting to share that experience with others.

Audiences watch the group in awe, mesmerized by their four voices resounding throughout the showroom. There are several moments when Human Nature performs without the band; these songs spotlight each performer’s amazing voice and the ability to perform in perfect harmony. Human Nature keeps everyone on their feet and dancing to tunes while they create an entertainment experience with feel-good messages that are found in timeless songs.

Don’t miss your chance to catch Human Nature perform at the Venetian.