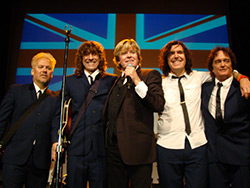 If you were to put a British school boy in a cloning pod and multiply him by five, you’d get Herman’s Hermits. Known for their clean-cut appearances, they were kinda like the One Direction of the ‘60s. They’re most popular for their hit singles, “No Milk Today,” “I’m Into Something Good” and “There’s a Kind of Hush.” They weren’t just about singing their sweet melodies and sailing into the hearts of people around the world. They even made it big in Hollywood, starring in films like “When the Boys Meet the Girls” and “Hold On!

Their British charm will melt your hearts and have you falling in love all over again. And if that isn’t good enough for you, at least they have their accents for a little side entertainment.