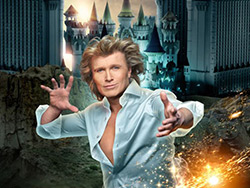 Now you see him, now you don’t. Did you miss Hans Klok just now? That’s ok, you’ll get another chance to see “The World’s Fastest Illusionist” when he steps on stage at Excalibur Las Vegas.

You know those magic kits you get as a kid? Well, Hans Klok got one when he was a child and look at him now, the star of his own Las Vegas magic show. Ok, ok, maybe it wasn’t that simple, but Hans definitely makes it look easy. So easy in fact, he broke his own world-record for the most illusions performed in a five-minute period by doing 12 large illusions in the time span. And in 2012 he was named a member of the Inner Circle in the prestigious The Magic Circle. Dude is THAT good.

Cheap tickets to Hans Klok inside Excalibur Las Vegas are available now. Get them while you can.