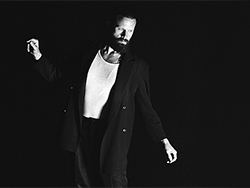 This stellar folk-rock artist has been steadily releasing solo albums since 2004, with his third studio album, Pure Comedy, earning a Grammy Award in 2017 for Best Recording Package.

A man with many talents, Father John Misty has been a member of multiple bands throughout his musical career, including Demon Hunter, Fleet Foxes, and Saxon Shore, as well as making contributions to albums for superstars like Post Malone, Lady Gaga, and Beyoncé.

His latest album Chloë and the Next 20th Century released in April of this year.