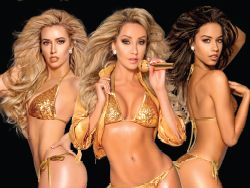 For 20 years adults-only topless show “Fantasy” has been the Strip’s biggest tease. A charismatic and seductive production features Vegas sexiest dancers on stage of Atrium Showroom at Luxor. The production received multiple awards including “Best Female Adult Show in Las Vegas” by InVegas in 2016, “Best Showgirls” in the 2015, and many others.

Since 2016 vocalist Lorena Peril hosts the show as a lead singer replacing Jaime Lynch, who had a dominant role in production since 2013. Lorena’s impressive voice, affable personality, and hot look won her the true love of the audience.

Abby, Ashton, Delecia, Geraldine, Isabella, Jessica, Kayli perform a variety of acts including solo pole dancing, girls-only trio acts, aerial dancing, steaming burlesque striptease, and more. Beautiful ladies start to fulfill fantasies from the very beginning of the show as they appear like sexy schoolgirls, or spicy Latin dancers, or rowdy cowgirls. Your dreams will come alive as you see the girls changing their provocative costumes from one dance to another. But be patient and those costumes will be gone completely! Hottest cast strips down in 15 themed dances at a range of music styles.

As the cast and guests take a short break to cool off, comedy impressionist Sean E Cooper takes the stage with his parody on some of pop culture celebrities. His old-Vegas comedy acts became a natural part of the production.

“Fantasy” is a popular choice not only among singles, but couples alike. Whether you have seen it or not, come to Luxor to see the girls unfolding all your fantasies! Performances run nightly.