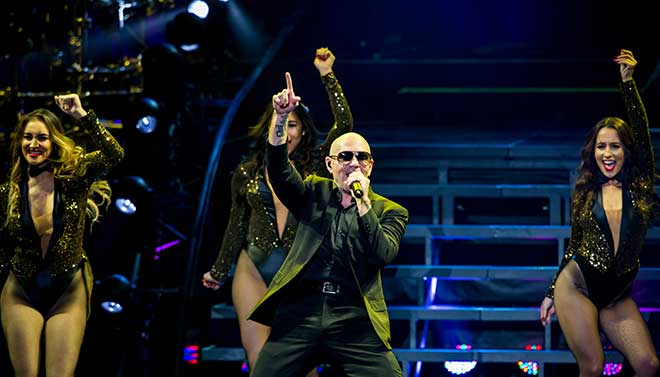 We’re Vegas.com, and we approve this message. This is one of those concerts where you make questionable decisions, and they all pay off. Example: chugging fireball while listening to Pitbull’s hit-single “Fireball.” Who’s in?

Mr. Worldwide is ready to party, and we all know there’s no better place to do it than Las Vegas. This international superstar is everybody’s favorite featured rapper. Check it: he’s collaborated with Jennifer Lopez, Pharrell Williams, Chris Brown, Daddy Yankee, Shakira, Lil Jon, and even guest-starred on the hit TV show “Empire.” He’s basically that dude everybody knows and wants to be friends with.

Starting his career in the early 2000s, Pitbull exploded onto the American music scene with his No.1 hit “Give Me Everything.” The rapper has sold over 80 million records worldwide and has won Multiple Grammy and Latin Grammy awards. His concert tours have taken him all the way around the world, making the name Mr. Worldwide an extremely fitting title. Now he’s back in Sin City once again for his newest residency Pitbull: Get Ready Vegas.

Pitbull is the master when it comes to creating upbeat party anthems. Be the first to hit the dance floor when Pitbull turns up the heat in Vegas. Get your cheap tickets to Pitbull: Get Ready Vegas at Planet Hollywood today.