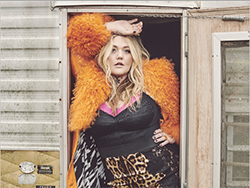 Elle King is stopping in Sin City to bring us her rebel country vibes to the Westgate’s International Theater for one night only.

Elle King hit superstardom with her 2016 hit, “Ex’s and Oh’s,” which was her first single to reach the Billboard Top 10 list. The singer was also nominated for two Grammy nominations the same year. She’s since had over 1.5 billion streams worldwide. Her most recent single features the equally stunning Miranda Lambert in the crowd-pleasing collaboration Drunk (And I Don’t Wanna Go Home.) The song was an immediate hit and premiered at #1 on the Billboard Rock and Country Digital Song Sales Chart.

Her unique blend of country, blues, and soul, mixed with her powerful voice, made her a quick favorite. Elle King was also a special guest on Miranda’s 2019 Roadside Bars & Pink Guitars tour.

Her latest release “Elle King, In Isolation” features a collection of raw songs/demos that she recorded acoustically in 2020 during her time quarantining.

Don’t miss your chance to see Elle King for one night only at the Westgate’s International Theater, so get your tickets today!