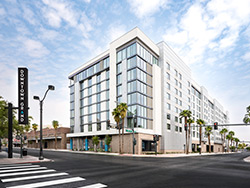 Downtown Grand is a resort that exudes urban cool. The hotel, located on Third Street between Stewart and Ogden avenues, is one of downtown’s most modern, hip properties. The hotel was formerly known as the Lady Luck, but was completely transformed in 2013 into the Downtown Grand. The hotel is just off Fremont Street, but there’s no lack of action. Just across the street is the Downtown 3rd area, which is full of cool drinking and dining joints like Triple George Grill, Hogs & Heifers Saloon and Pizza Rock.  Downtown Grand is also adjacent to the Mob Museum and is less than a mile from shopping at the Las Vegas Premium Outlets – North and cultural events at The Smith Center for the Performing Arts. The hotel even offers guests complimentary daily shuttle service to some of downtown’s hot spots including the Neon Museum, Downtown Container Park and the outlet mall. Gamblers can try their luck in a 30,000-square-foot-casino that features industrial chic décor — including reclaimed bricks on the walls, existing rust and graffiti and a cool brick façade. It houses more than 600 state-of-the-art slot machines and 30 table games as well as a William Hill Sports Book.  For a bite to eat at the Downtown Grand, the stylish bistro the Freedom Beat is open for breakfast, lunch and dinner. The Commissary features a communal seating area with an outdoor patio. There are artisan Latin-inspired sandwiches, burgers and a rotisserie with chicken, brisket, tacos and more. To get you going in the morning there’s also a coffee bar in The Commissary serving java concoctions, crepes, pastries and breakfast sandwiches. At night (Who are we kidding? Probably during the day too.), you’ll find plenty of places for a stiff cocktail. Furnace is Downtown Grand’s version of the center casino bar. Watch out for brain freeze at The Ninth Island, a shave ice and daiquiri bar from Hawaii. And Art Bar is a hip spot to grab a sophisticated drink, lean back and gaze at the art plastered on the ceilings. They also serve munchies like charcuterie, wings and chicken sliders. However you decide to spend your time at Downtown Grand, make it a priority to visit The Pool Deck. Located on the third floor and open seasonally, it boasts an outdoor pool, fire pit and daybeds. Sit at a picnic table and enjoy lunch or a drink amid the park-like landscaping.
Select a date and time