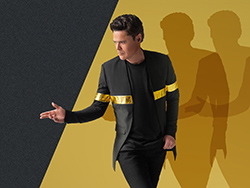 Donny Osmond has been a Vegas staple for over a decade, but this solo show at Harrah’s is gonna be a version of Donny you’ve never seen before.

Donny’s last stint on the strip was with the hit show Donny and Marie. The show was held inside the Flamingo and ran for an impressive 11 years. The show won multiple awards during its run and became a staple of the Las Vegas Strip.

But Donny Osmond was a musical legend long before he hit the neon city. His musical career has earned him 33 gold records, and he has sold over 100 million records through his six decades in show business.

Donny Osmond has also appeared on Broadway and gave the voice to Disney Mulan’s hit song “I’ll Make a Man Out of You.”

Don’t miss Donny Osmond’s triumphant return to Sin City and get tickets to his new residency at Harrah’s today!