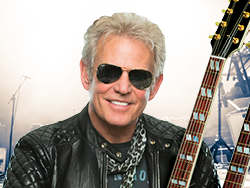 Don Felder’s back in the rock and roll world limelight with his first solo album in seven years, and you’ll be able to hear all of his hits, both new and old, live at the Westgate for one night only.

His latest album, American Rock ‘n’ Roll, consists of 11 new songs that range from heavy-hitting rock numbers to stunning ballads. His previous work has earned him a legendary place in the Rock and Roll Hall of Fame alongside his other bandmates from The Eagles in 1998. The Eagles still hold the title of recording the top-selling album of all time, which has sold over 38 million copies.

Don Felder’s unbelievable musical prowess is something you won’t want to miss!