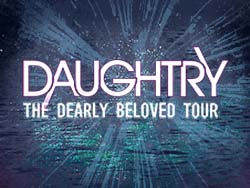 You won’t want to miss your chance to experience the rock band Daughtry live at Virgin Hotels on March 19, 2022.

Lead singer Daughtry hit the ground running as a finalist on American Idol in 2006, which he followed up with not just one but two chart-topping albums on the Billboard Hot 100.

From 2006 to now, the band Daughtry has produced six different studio albums that have sold over 9 million copies and had over 25.6 million digital track downloads in the United States.

Their current tour for their newest album, Dearly Beloved, brings the band back to their post-grunge, hard rock roots after trying out a mellower style of music with their previous album, Cage to Rattle. Dearly Beloved hit the Top 10 on the Billboard Charts for rock, hard rock, and independent albums.

Get your tickets now to rock out to Daughtry for one night only at Virgin Hotels Las Vegas on March 19, 2022.