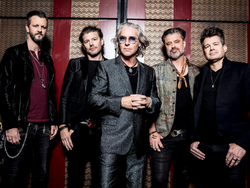 The hit rock band Collective Soul has been rocking out since the 90s, and you won’t want to miss your chance to see them live at The Palms Las Vegas for one night only.

Collective Soul’s first album, released in 1994, reached double-platinum status with their hit song “Shine,” peaking at No. 11 on the Billboard Hot 100 Charts. Their self-titled second album was certified triple platinum in 1995 and had a 76-week-long run on the Billboard 200 charts.

Their long-awaited latest album, Vibrating, released in August 2022, continues the band’s iconic sound and elevates it to new, energetic heights.