Home / Chris Isaak with Lyle Lovett and his Large Band 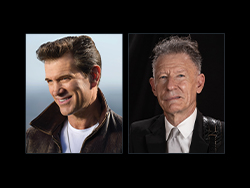 Platinum-selling singer and actor Chris Isaak is partnering with Grammy-winning performer Lyle Lovett and His Large Band for one night of fantastic country blues tunes at Virgin Hotel Las Vegas.

This concert features an arrangement of classic Lovett favorites plus a sneak peek of his newest album releasing in May.

Chris Isaak’s four-decade-long career began in 1985 when he released his first album. Known for his 50s style and crooner sound, though his early albums were critically praised, he didn’t reach wide popularity until 1991 with his song “Wicked Game,” which peaked at No. 6 on the charts with a matching music video that became an MTV hit. Chris Isaak isn’t just a stellar singer; his acting career includes films like Silence of the Lambs, Little Buddha, The Informers, and the HBO miniseries From the Earth to the Moon, where he portrayed astronaut Ed White, the first American to do a spacewalk.

Lyle Lovett is just as star-studded as Isaak, releasing 13 studio albums, 25 singles, and winning 4 Grammy Awards. Though typically considered a country singer, his master compositions often include other styles like jazz, blues, swing, and folk. You can also see Lovett in his many tv and film appearances.

Don’t miss your chance to see the legendary dynamic duo of Chris Isaak with Lyle Lovett and His Large Band live at Virgin Hotel Las Vegas. Get your tickets today!