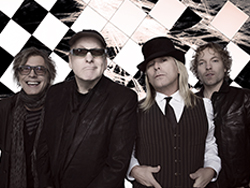 Rock and Roll Hall of Fame rock band Cheap Trick is coming to the STRAT to rock out Las Vegas for two legendary weekends in February and March 2022.

Beginning in 1973, Cheap Trick found fame in Japan with their second album, In Color, released in 1977. Their American rise to stardom wouldn’t be until 1979 when their live album Cheap Trick in Budokan reached the U.S. Top 10 charts that included the killer song “Want You To Want Me.”

The band has been consistently touring throughout the decades, performing in over 3,700 live shows and selling over 20 million albums in the process.

Their newest album, In Another World, was released this past year in April, which means that their current tour features all of your classic favorites along with plenty of their new work.