Home / Cedric the Entertainer and Friends 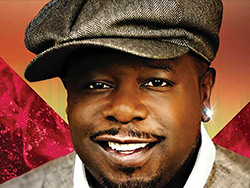 Multi-talented actor-comedian Cedric the Entertainer debuts his standup comedy at Wynn Las Vegas on May 16, 2020. As an original “King of Comedy,” Cedric joined fellow comedians Steve Harvey, Bernie Mac and D.L. Hughley on a nationwide tour selling out to audiences around the country.

When you’re born with a name like “Cedric The Entertainer,” you’d better be good at entertaining. Personally, that’s quite a lot of pressure to place on a kid, but luckily it all worked out. Even better? We’re pretty lucky to see him up-close-and-personal on the Vegas stage.

As tough as it would’ve been to perform at the Apollo, imagine having to host there. And in 1987 that’s exactly what Cedric The Entertainer was tasked with… and he killed it! His command of the audience, quick wit and off-the-top hilarity helped him land roles on “Ride,” “The Steve Harvey Show” and a laundry list of movies and shows. His Hollywood accolades aside, Cedric is just a good dude. His charity foundation grants scholarships to graduating high school seniors each year, along with various other causes.

So what’re you waiting for? You’re coming to Vegas to be entertained and “entertainer” is literally Cedric’s name. Cheap tickets for Cedric The Entertainer are available now on Vegas.com.