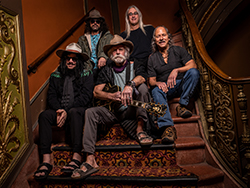 Grammy Award-winning guitarist Bobby Weir is coming to Virgin Hotels Las Vegas with the equally-talented musicians of the Wolf Brothers for two nights of rock hits.

Bobby Weir is one of the founding members of the legendary rock band the Grateful Dead, winning him a Grammy Lifetime Achievement Award in 2007. Known as one of rock’s most distinctive guitarists, he’s worked with a wide range of well-known bands and released his first solo album, Blue Mountain, in 2016 to critical acclaim.