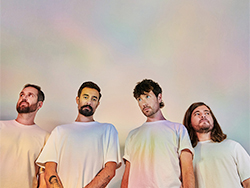 UK pop band Bastille is stopping at Virgin Hotels Las Vegas on their Give Me The Future Tour to celebrate their latest studio album’s release.

Bastille’s album releases take creativity to an entirely new level by building immersive fantasy worlds that envelope their fans in each song and the soundtrack’s overall message.

Their fourth collection combines their music with the story of a fictitious tech giant, Future Inc, that lets users make their dreams a reality through their “Futurescape” device.

Give Me The Future explores themes like intimacy, physical connection, and the loss of restrictions by pulling inspiration from Science Fiction, virtual reality, Paul Simon’s Graceland album, and much more.

Each song creates a unique and dreamy dancescape that invites listeners to become lost in their own minds. Bastille fills their Give Me The Future album and corresponding tour with all of the pounding percussion, surging harmonies, and stunning instrumentation that has won them several music awards and plenty of critical acclaim.

For one night only, Las Vegas visitors can step into the breathtaking, powerful world that Bastille creates.

So get your tickets today to experience Bastille live at Virgin Hotels Las Vegas and let your imagination run wild.