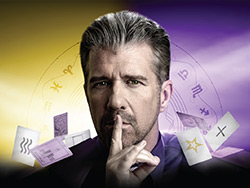 When it comes to the world of magic and mysticism, do you consider yourself a believer in the unknown? Well, it may surprise you that magician and master mentalist Banacheck is a devote nonbeliever, and trust us when we say that his skepticism is absolutely a gift to the world.

Banachek’s current reputation as the world’s leading mentalist began when he was just 18 years old when Banachek and a friend signed up for a “scientific” study called Project Alpha.

For the next four years, Banachek would use his arsenal of mentalist tricks to convince the newly founded McDonnell Laboratory for Psychical Research of Washington University. Some of these researchers were so convinced of Banachek’s “psychic abilities” that once he revealed the truth, they still refused to change their minds.

Banachek has also partnered with multiple investigators to expose fraudulent psychics, mediums, and spiritualists who take advantage of the suffering and emotions of others for monetary gain. One of his most famous investigations was of the American televangelist Peter Popoff who he unmasked on The Tonight Show Starring Jimmy Carson in 1986.

This must-see new show at The STRAT showcases the bewildering skill of Banacheck, who Penn and Teller have boasted as “a magical thinker of deep, deep subtlety.”