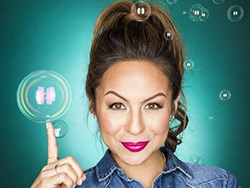 She doesn’t want her nails did, she doesn’t want to take your complicated order and she sure as hell doesn’t need a boyfriend to be funny. Anjelah Johnson is coming to Vegas to deliver jokes that will have us *Valley Girl accent* literally ROFL. Yeah, we used that acronym, don’t hate.

If you like your comedy down and dirty (with a side of ghetto fabulous), Anjelah is your girl. She broke the internet way before Kim K did. And all she needed to do was take us to “The Nail Salon” in her popular stand-up bit. That success landed her on Mad TV where her character, Bon Qui Qui broke the internet again! Sketch after sketch she had the crowd roaring with laughter and helped her score deals with Netflix and Hulu. If you haven’t seen her comedy specials, as Bon Qui Qui herself would say, “Rude.”

Anjelah Johnson is coming to Vegas and she might just break the internet again.