Home / alt-J and Portugal. The Man 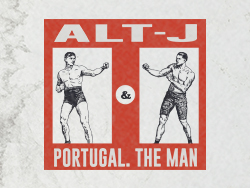 Celebrating the release of their newest single release, Portugal. The Man and alt-J are hitting the Virgin Hotels Las Vegas stage for one night only on their latest national tour.

Their newest hit, “What, Me Worry?” was inspired by the joy of laughter, and their latest concert series is doing all they can to spread that celebration of laughter throughout every one of their concert stops.

Portugal. The Man earned the Grammy for Best Pop Duo/Group Performance in 2017 for their hit six-time platinum song “Feel it Still” from their RIAA gold-certified album “Woodstock.” The hit was so popular it even broke the record on Alternative radio as the longest-running single at #1 at 20 weeks.

Portugal. The Man are also known for their dedication to social justice. Their PTM Foundation has helped in issues like human rights, community health, and the environment, specifically focusing on helping to minimize the effects of environmental changes on indigenous people.

This particular tour is also the launch of their latest initiative, PTM’s Night Out, which supports fans that require ADA access.

So grab your tickets today to feel the joy and laughter along with alt-J and Portugal. The Man when they hit the Virgin Hotels Las Vegas stage.